Hummingbirds comprise the family Trochilidae, among the smallest of birds, with most species measuring in the 3"-5" range.

What do hummingbirds eat?

Hummingbirds, like other birds and other animals, need food, water, and shelter, the basic necessities of life.

Their diet consists of nectar from flowers (red is the favorite color), and small insects such as aphids and spiders.

Hummingbirds feed in many small meals, consuming small invertebrates and up to twelve times their own body weight in nectar each day.

Many plant species rely on hummingbirds for pollination and provide nectar and tiny insects in exchange. Hummingbirds staunchly and aggressively defend a feeding area, or feeder, even when not feeding.

Can hummingbirds walk? No ... they can only fly

The beat of their wings is so rapid, up to 55 times a second, that a "humming" sound is produced, and the wings appear blurred. They are the only bird species that can fly backwards, or even upside down.

Hummingbirds can't walk or hop, but they can shuffle around a feeder with its extremely short legs, which are not very strong.

How big is a hummingbird nest?

A hummingbird's nest is very small, usually about 1.5" in diameter. Eggs are likewise small, less than 1" long, about the size of a jelly bean.

The female lays her eggs on different days. The Ruby-Throated Hummingbird lays 2 eggs.

Gestation period is about 16-18 days.

How many hummingbird species are there?

The hummingbird family is very large, with over 330 species and 115 genera, mostly south of the U.S. Hummingbirds are found only in the Western Hemisphere, with almost half the species living in the "equatorial belt" between 10 degrees north and south of the equator. Fewer than two dozen species venture into the U.S. and Canada, and only a few species remain year-round. On this website we feature the 18 most common hummingbird species found in North America.

Where are hummingbirds found in the United States and Canada?

In the Eastern and Central United States and Canada, the most common species is the Ruby-throated hummingbird. Several species are in the Gulf region.

What is the most common hummingbird?

The Ruby-throated Hummingbird is the most common, and the only species regularly seen over most the eastern United States and Canada. Ruby-throats are the only hummingbird found east of the Great Plains, except for the Rufous.

It is about 3 3/4" in length, and metallic green above. Its notes are a rapid, high-pitched squeaky, chipping sound.

The female's throat is white, and immatures are similar in color to the female. The female body is slender, with a blunt, rounded tail with white corners.

The female Ruby-throated and Black-chinned are very similar, but have separate ranges. Males use a repeating "pendulum" arch of flight to attract females.

How big is a Ruby-throated hummingbird?

How long does a Ruby-throated hummingbird live?

The average life span is estimated by experts to be 3 - 5 years.

Most deaths occur in the first year of life. The record age of a banded Ruby-Throated hummingbird is 6 years, 11 months.

How do we make a hummingbird feeder mix?

When formulating your hummingbird mixture recipe, remember that nectar found in nature is typically in the range of 12%-35% sugar (sucrose). The solution you prepare should be similar to that found in nature.

We make our own solution, mixing four parts water to one part sugar, i.e., 20% sugar. We do not boil the water, but we find that using warmer water helps dissolve the sugar quicker.

Never use red-dye ... it is just not needed in the feeding solution, and it can be harmful to hummingbirds.

What are hummingbird "scouts"?

Many people refer to the first hummingbird sighting of the year or early arrival as being "a scout". Some species of birds, such as Purple Martins, do send a bird in advance of the migrating flock to scout out potential nesting and breeding areas.

However, hummingbirds are loners, and migrate alone. They do not scout out an area, and then return to notify others. So, despite popular theory, there is no such thing as a hummingbird scout.

How far does the Rufous Hummingbird migrate?

During migration, they can be found in mountain meadows as high as 12,000 feet. Migration paths of the Rufous can span over 3,000 miles.

I saw a hummingbird in British Columbia in the winter. Can it survive in the cold?

Anna's Hummingbirds have the northernmost year-round range of any hummingbird. These hummingbirds are a common resident of the northern Pacific coast, west of the Sierra Mountains, frequently in coastal lowlands. The species breeds from Vancouver, Canada south to northern Baja California and east through southern Arizona.

This hardy bird can be a permanent resident along the Pacific Coast, staying through the winter in many areas where no other hummingbirds are present.

How Long to Leave Up Hummingbird Feeders?

During the fall migration, it is recommended that hummingbird lovers leave up their feeders for about two weeks after they sight what they think is their final bird. Just to feed those late-migrating hummers!

Will I see the same hummingbirds next year?

Hummingbirds have an innate ability to remember their favorite feeding locales. Banding experts have shown time and time again that individual hummingbirds return to the same spot year after year.

So enjoy your hummers today ... and hopefully you will see them again next year!

Yes, hummingbirds molt, losing old feathers and replacing them with new ones, much like other species of birds. Molting often happens in the mid-summer, prior to the southbound, fall migration, and after breeding season (when male hummingbirds have near-perfect feathers). But some may start migration before molting begins.

Molting commonly occurs on the body, and not so much on wing or tail feathers.

The annual molt which begins during fall migration is completed during the winter. With their first molt, juvenile males develop their red/purple/pink throats.

Can a Praying Mantis eat a hummingbird?

The answer is "Yes".  We have seen it happen on a feeder, and it isn't a pretty sight. As difficult as it might be to imagine, "Mantids" can sometimes capture, kill, and eat a hummingbird. The quick strike of the mantid, on a plant or feeder, can immobilize a hummingbird.

How do I deal with ants on my feeders?

Why am I seeing fewer/more hummingbirds in my yard?

This is a difficult question to answer. We honestly don't know why there are fewer, or more, hummers at one particular location compared to previous years.

There are many factors influencing how many hummers are in one particular area. Temperature variations, storms, flowering levels, migration, etc. all impact populations. Also, they tend to disappear when mating and raising their young. Many nature enthusiasts might see many hummingbirds early in the spring, and then witness a decline in numbers as the birds migrate further north.

The Hummingbird Central website is not run by professional, trained ornithologists, and does not have the resources to conduct detailed, scientific studies about hummingbird population trends. We recommend that those interested in this subject refer to organizations such as Journey North, Cornell Lab of Ornithology and The Audubon Society for studies on hummingbirds.

Many hummingbirds look similar ... how do I tell the difference?

Many hummingbirds DO look alike, and sometimes juveniles and females are really difficult to differentiate. Shown below is a comparison of several common species. 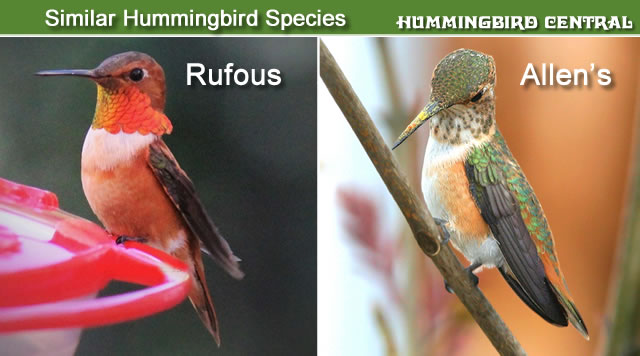 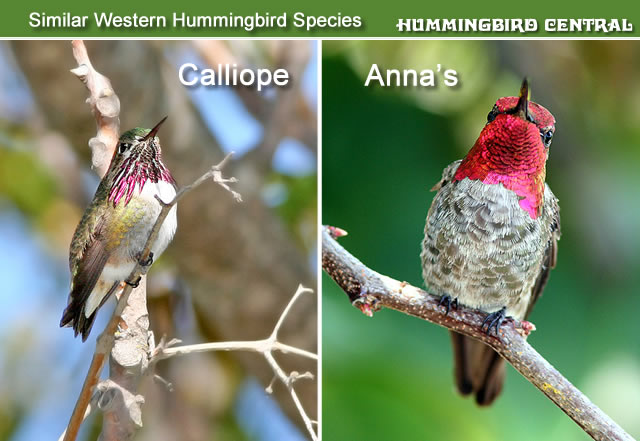 Are there any white Hummingbirds?

While rare, there are indeed white-colored hummingbirds. Read about Albino and white Leucistic Hummingbirds.

How can children learn about hummingbirds?